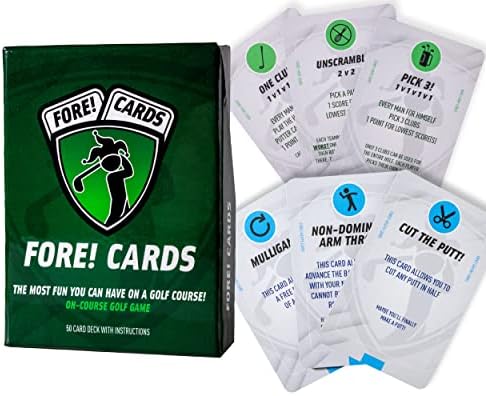 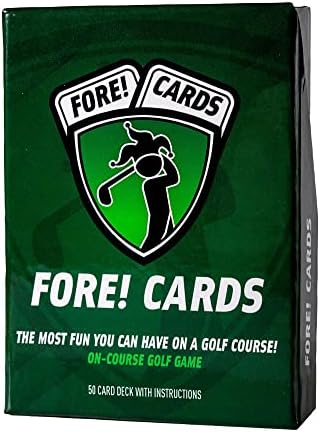 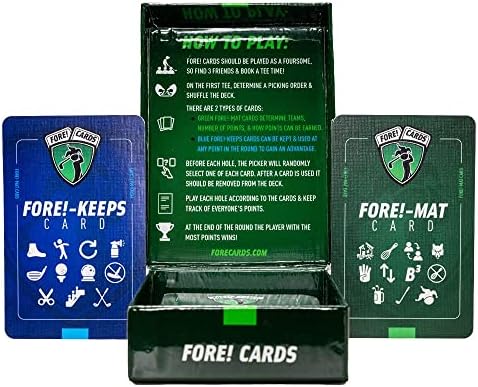 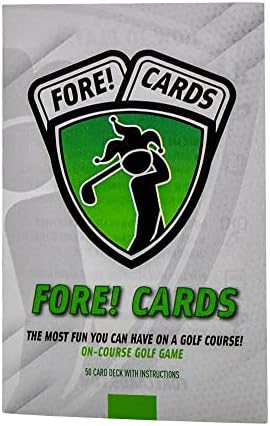 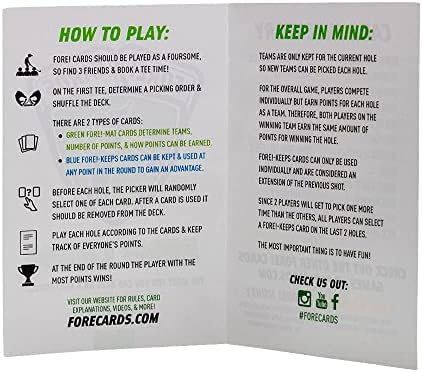 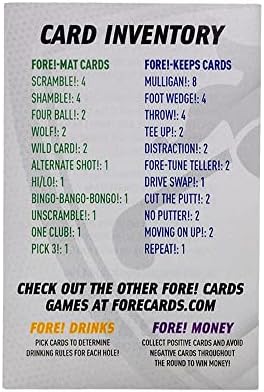 Fore! Cards is an on-course game you can bring to your next round to spice things up. Cards are picked on each hole and determine how the hole will be played. Fore Cards incorporates a variety of popular golf formats with non-golf elements such as kicking and throwing the ball.

It’s the most fun you can have on a golf course!

Fore! Cards is designed to be played as a foursome. Many of the Fore-Mat cards are played as 2 vs 2 so 4 players are optimal.

Since ONE player will select cards on each hole, you will need to determine the order in which cards will be picked before starting the round.

Before each hole, one player will select both a green Fore-Mat and a blue Fore-Keeps card. The Fore-Keeps card is kept by the player and can be used anytime throughout the round.

4. Play the Hole According to the Fore-Mat Card!

The Fore-Mat card will determine how the current hole will be played for all players. It also determines the number of points that can be earned on the hole.

5. Keep Score and Have Fun!

At the end of each hole, points are awarded to the winning player or players. At the end of the round, tally up the points for each player and the players with the most points wins!

Scramble – pick a partner and play this hole as a two man scramble against the other two players.

Shamble – pick a partner and play this hole as a two man shamble against the other two players.

Alternate Shot – pick a partner and alternate shots against the other two players.

Unscramble – pick a partner and play the worst shot instead of the best. This one is menacing!

Four Ball- pick a partner and compare your better balls against the other two players.

Wolf – the player who selects this card can choose to be the wolf and play against the other 3 players or pick a partner!

Hi/Lo – pick a partner and compare both of your scores against the other two players.

Bingo Bango Bongo- points can be earned in 3 ways in this fun game.

One Club – the hole must be played using only one club until reaching the green!

Pick Three – each player selects three clubs to play the entire hole with.

Foot Wedge – this card allows you to kick the ball!

Mulligan – this card allows you a free re-do of any shot!

Drive Swap – use this card to swap drives with an opponent!

ForeTune Teller – use this card to get a free read of a putt!

Non-Dominant Arm Throw – this card allows you to throw the ball using your non-dominant arm!

Distraction – use this care to distract an opponent!

Cut The Putt – use this card to cut any putt in half!

Movin’ On Up – move up to the next tee box with this card!

No Putter – hand this card to an opponent to force them to putt with any club other than their putter!

Repeat – hand this card to an opponent to force them to use the same club twice in a row!

On course Golf Game
Challenge your friends to a fun golf game!
50 Cards to determine how each hole is played
Includes a variety of popular golf formats!
Spice up your next round!, $24.99, $24.99